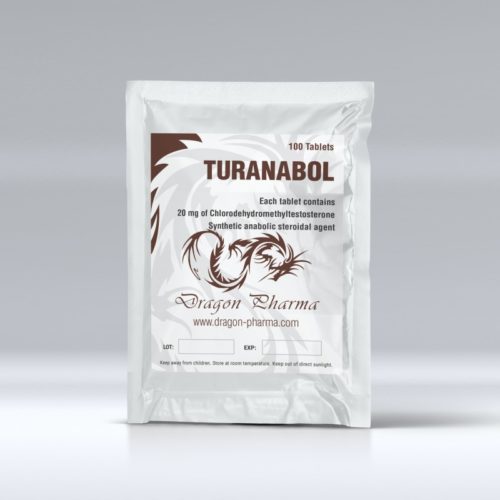 Turanabol from Dragon Pharmaceuticals is an anabolic steroid, which began to be widely used in the 1970s and 1980s by athletes, especially in athletics. At the moment, it is one of the most popular anabolic steroids. Turanabol is close in effects and chemical structure to Methandrostenolone, is an “easy” preparation for an initial cycle, and is used “solo”, but there are also combinations with other drugs.

Turanabol allows you to gain practically, dry muscle mass and does not hold water in the body. During training, strength indicators increases, muscles become much harder and harder. Although the weight and relief progresses not so fast as in other cycles, after a course of Turanabol, it is very difficult to “drain” because the secretion of your own Testosterone is minimal.

One of the important characteristics of Turanabol is the absence of the “effect” of the hormone estrogen (due to the addition of chlorine to the molecule, the hormones are not aromatized). In other words, such side effects as gynecomastia, swim fluids, etc. are not found.

The most optimal dosage of this drug, which has minimal side effects – 30-40 mg per day. However, often many neglect the dosage, bringing it up to 100-150 mg per day.

Turanabol can be taken as a muscle mass builder, and on cutting with a special diet. For buildingf muscle mass, a combination with Sustanon or Testosterone Enanthate is best suited: 30 mg of Turanabol + 250 mg of Testosterone Enanthate or Sustanon 250 mg every 4-5 days. Duration of this cycle is 6-7 weeks. On leaving the course, use Clomid in a dosage of 50-100 mg for 10 days. Also, Turanabol is great for such a popular Nandrolone – Sustanon cycle, only Turanabol is used instead of Methandienone.