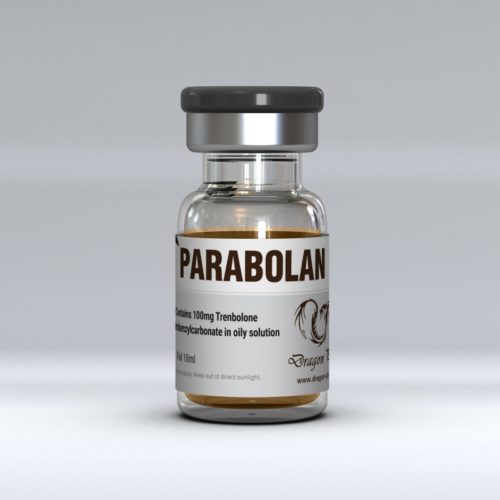 Parabolan 100 is one of the most popular and powerful drugs on the market of bodybuilding. With this drug, you will easily gain muscle mass, as well as burn excess fat, thereby making your muscles more prominent.

Parabolan 100 – a potent anabolic steroid was first used for veterinary purposes, which in turn increased muscle mass and appetite in cattle. To increase the duration of the action, Trenbolone is not used in the original form, as a rule, esterified derivatives are used: Trenbolone Acetate (with the shortest duration of action), Trenbolone Enanthate and Trenbolone Cyclohexylmethylcarbonate and Trenbolone Hexahydrobenzylcarbonate. After the esters of Trenbolone enters muscle, they gradually decompose by the plasma lipase, thereby initiating a prolonged intake of the active substance into the blood. Trenbolone has a powerful anabolic effect, but it has many side effects, so it is not the best choice.

For an 8-week course using Parabolan 100, you can increase muscle mass to 10kg. Your strengths from each week of the cycle will increase. This drug increases the level of insulin-like growth factor by 200%, as well as Parabolan 100 promotes fat burning not only on an independent basis, but also by stimulating the secretion of growth hormone. Trenbolone reduces the level of cortisol in the body.

Usually, when using this drug, side effects are possible such as: insomnia, high blood pressure, increased aggression. Due to the fact that during the cycle, urine is colored red, due to the findings of metabolites, some mistakenly start to assume that the drug has a bad effect on the kidneys, but does not cause Parabolan 100 toxicity to the kidneys. The effect on the liver in moderate doses will be negligible.

It is recommended not to exceed these dosages: Trenbolone Acetate – 50 mg per day, Trenbolone Enanthate and others – 300 mg per week. Begin to take the drug with minimal doses, in order to assess the tolerability of your body. It is not recommended to take without the addition of Testosterone. The duration of cycle is no more than 5-6 weeks without the use of Gonadotropin.

Exit From Parabolan 100 Cycle: 2-3 days after the completion of cycle, you need to start taking Clomiphene (Clomid), in a dosage of 50-100 mg for 2 weeks. By the last week, the dosage is reduced to a complete cancellation. To maximize the effect and preserve the muscular mass obtained, it is recommended to take sports nutrition and follow a special diet. Also after the cycle, it would be useful to drink Testosterone boosters.