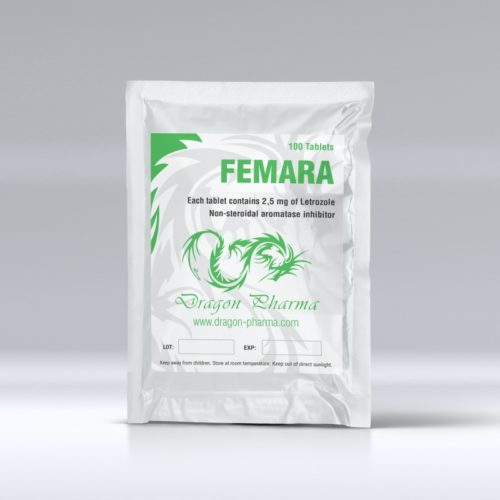 Most often Femara is advised for athletes as an auxiliary drug on steroid cycle, and in particular for post-cycle therapy. Basically, this drug is used by bodybuilders, powerlifters and other representatives of power sports who take especially powerful steroids, since the effect of Letrozole is recognized as the most powerful in the field of aromatase inhibitors.

According to the statistical data obtained during research, Letrozole allows almost completely to get rid of estrogens in the body, by about 98%, and for this purpose, minimal doses at the level of a quarter of a tablet or even less are sufficient. One tablet of Femara contains 2.5 milligrams, and its effectiveness in the direction of getting rid of estrogens is fixed even with a dosage of 0.1 to 0.3 milligrams.

In this case, it should be noted that Femara should be used carefully, because estrogens in small quantities are still needed by the body, because they directly affect the immune system, the health of the cardiovascular system, and the possibility of muscle growth. That is why more than a quarter of the pill is strictly not recommended.

In addition to eliminating estrogens, Femara also has other properties. In particular, sometimes Letrozole can also be prescribed not only for treatment, but also for the prevention of gynecomastia, and in addition, Femara is used to prevent arterial hypertension. Anyway, there are very few reviews about the use of this drug, because it appeared on the market of sports pharmacology not so long ago.

In order to test the reaction of your body to Letrozole, you should start taking it with minimal dosages, at the level of 0.1 milligram. It is likely that to solve your problems on post-cycle therapy this may be enough, but if the symptoms of excessive estrogen content in the body do not go through the dosage it is quite possible to increase until the problem is solved.