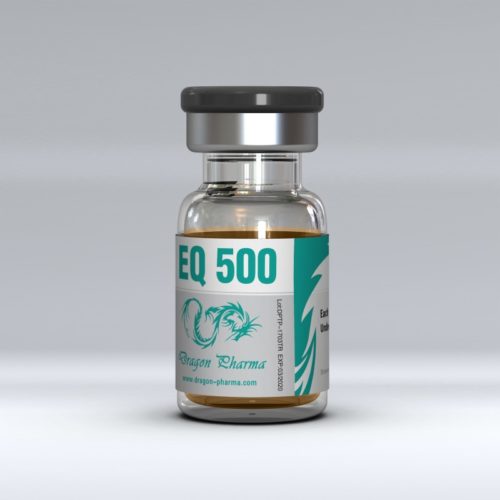 EQ 500 is a well-known, and very effective anabolic, which took its rightful place in the world of sports pharmacology. The main purpose of its application is the building of a strong body, elastic muscles with the fixation of the achieved results for a long time. In this case, many buy EQ 500 because it has minimal side effects, does not cause increased aromatization and a sharp androgenic effect.

At the moment, the most common variant of Boldenone is Boldenon Undecylenate – an ester substance used by injection, because it has a number of similar chemical characteristics with Testosterone at the molecular level. At the same time, Boldenone Undecylenate has profitable differences from this aggressive hormone – it excludes the kickback effect and significant water retention, so many sports professionals recommend buying Boldenone and newcomers who are just beginning their acquaintance with the world of power sports.

In spite of the relative safety of the drug, it should be taken deliberately, clearly following the indicated dosage and duration of the course of admission indicated by the trainer. EQ 500 is very popular among bodybuilders and powerlifters due to the fact that its anabolic index is very high, and the degree of androgenic effect is scanty.

The active substances of the preparation, between which carbon atoms are present, do not have a strong estrogenic effect. The risk of aromatization due to this from the use of a steroid is extremely low. EQ 500 can be bought at a loyal price online. According to numerous reviews of athletes who have already tried EQ 500 on themselves, we can conclude that this anabolic steroid builds a qualitative muscle mass, but not too fast, as the process of increasing muscle volume is of a natural nature.

EQ 500 significantly increases the athlete’s appetite and promotes the accelerated production of platelets – red blood cells, which transport oxygen and nutrients throughout the body’s cells.

Despite the fact that EQ 500 is a safe steroid for body, the risk of unwanted reactions is still present, but this is due to the characteristics of the athlete’s body. After the course of application, EQ 500 does not exclude the appearance of acne, increased aggressiveness, excessive production of sebum, the emergence of gynecomastia. To prevent the risk of side effects, it is recommended to take EQ 500 along with Mesterolone (Proviron), or Tamoxifen (Nolvadex). If the first signs of an abnormal symptomatology are found, the drug should be immediately withdrawn and informed of this to the coach, who either decides to change the steroid, or adjusts the dosage.

The course of taking EQ 500 depends on the individual physical characteristics of the athlete. Typically, injections are administered for 6-10 weeks, 300-800 mg per week. It should be noted the long half-life of the substance in the body, and this, in turn, affects the rate of muscle growth. The main thing to remember is an exaggeration of dosage leads to undesirable side effects, and insufficient quantity will not give the desired result. To obtain maximum effect, the course of EQ 500 use can be extended to 12-14 weeks. This is due to the fact that the active components are synthesized for a long time in the body. But, such a long reception of this steroid is only permissible for professional athletes. For beginners, the course and dosage of the drug are minimal. On EQ 500 cycle, one should not forget about regular physical training and rational nutrition, without these conditions a special effect from EQ 500 should not be expected.