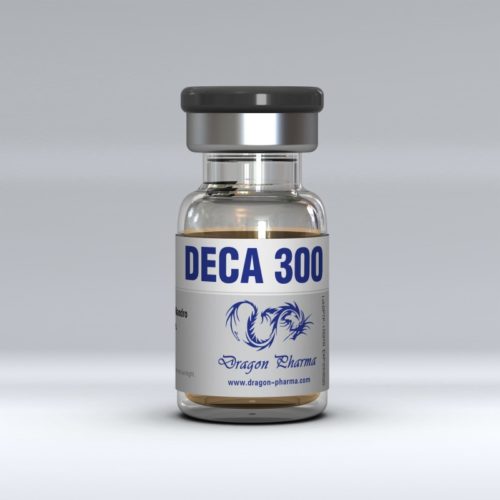 Deca 300 from Dragon Pharmaceuticals – anabolic steroid can be formed in the human body after heavy or prolonged physical exertion or during pregnancy, while the concentration of its main metabolite of 19-norandrosterone in urine is minimal and remains within 1-2 nanograms per ml. Deca Durabolin was produced and released on the market in 1962 to date is one of the most popular steroids, and all because its level of anabolic activity is very high, with no significant side effects.

Deca 300 is the structural difference between Nandrolone and Testosterone, it is the absence of a carbon atom in the 19th position (hence the name 19-nortestosterone) and this makes it more like a progestin. However, due to this interaction with progesterone receptors, the drug entails a number of side effects, of which we will write later.

Another of the main differences is that Testosterone in the body is gradually converted by the enzyme 5-alpha reductase into a powerful androgen-dihydrotestosterone, because of which most side effects are formed. Nandrolone, on the contrary, turns 5-alpha reductase into an extremely weak androgen-dihydronandrolone, which practically does not affect the body and does not cause side effects. However, this can be one of the reasons for lowering the libido during the cycle (due to a drop in the level of androgens in the blood).

As with all popular drugs, for one cycle alone, you can gain up to 8 kg of muscles, with minimal loss after the cycle. The drug strengthens your bones and ligaments, as it used to treat osteoporosis. It eliminates the pain in your joints, as it increases the synovial fluid (joint lubricant). Enhances your immune system.

Deca 300 has one of the weakest probabilities of side effects. As a result of low androgenic activity, such side effects as acne, alopecia, body hair growth practically do not occur. Nevertheless, they are possible, as with any steroid, but using Deca 300, these side effects are extremely rare.

Deca 300 has a very low level of conversion to estrogens, according to the latest data, 5 times less than Testosterone. The highest level of conversion is observed in liver. Whereas the main place where the transformation takes place (adipose tissue) remains inaccessible to this process. Deca 300 has no side effects that are associated with estrogens, side effects such as: gynecomastia, accumulation of water into body, do not occur.

Deca 300 cycle lasts for 8-10 weeks, while some athletes used it up to six months, gradually increasing the dosage level. Injections are usually performed up to 1 time per week. The recommended dose of Nandrolone is about 300-400 mg per week, but you should know that the initial phase of the drug should start at lower dosages. The maximum dosage is 600 mg per week, however, as in all other drugs, with increased dosages, the risk of undesirable side effects increases.