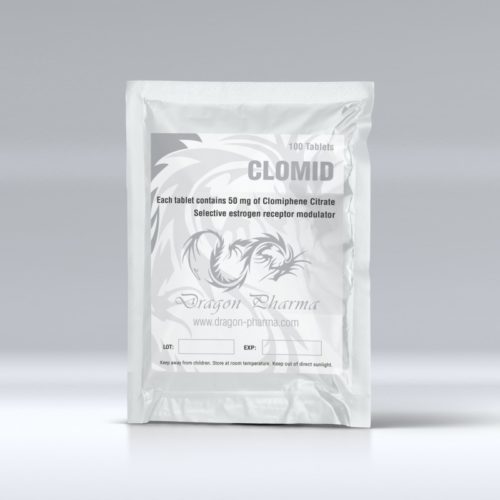 Clomid is a drug of non-steroidal origin, which has anti-estrogenic activity. The main active substance of this drug is Clomiphene Citrate. Clomid is available in the form of tablets with a dosage of 50 mg per tablet.

Clomid does not belong to the group of anabolic/androgenic steroids. Its main role is to stimulate the pituitary gland to release more gonadotropins. Gonadotropins are protein hormones that are secreted by gonadotropic pituitary cells and stimulate a faster release of follicle stimulating hormone (FSH) and luteinizing hormone (LH). The release of FSH and LH led to an increase in body’s own Testosterone levels in the body. Usually, Clomid helps maintain the required and normal Testosterone levels within 10-14 days after it is taken.

In the world of bodybuilding, the key role of this drug is the antiestrogen. Clomid not only reduces the effects of estrogen in the body, but is also used to slow catabolism after taking anabolic steroids.

Clomid and Nolvadex (Tamoxifen) are both selective estrogen receptor modulators. However, they act in different ways.

The combined administration of Clomid and Nolvadex causes a more pronounced increase in the level of luteinizing hormone (LH).

For athletes, the following scheme of Clomid administration is most rational: first 5-6 days take 1 tablet 2 times a day – in the morning and in the evening after eating, washing down with a glass of plain water; The next 8-9 days should be taken 1 tablet 1 time per day.

For women who want to normalize the function of the ovaries, Clomid treatment is prescribed by a doctor individually.